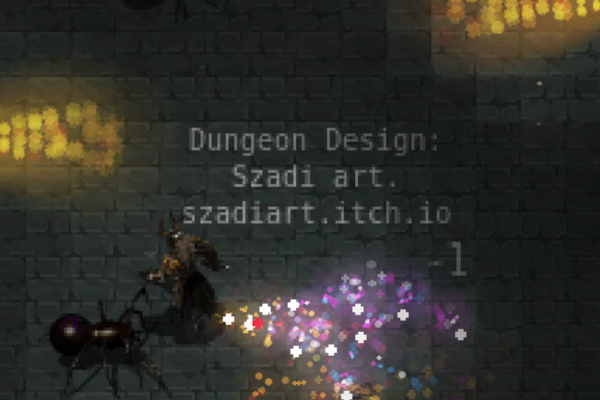 I added some nice echo to increase epicness a bit and I tried to get the volumes more adjusted but I think there's still room for improvement.
Some sentences are new/reworked, for example when dying before you reached the first safe room.
There are also two new outtakes, if you manage to reach the last dungeon. Oh and... try idling a bit. :P

Again a nice little improvement on the atmosphere. Dungeon 3 and deeper now have a subtle fog passing through as well as some particles in the air. Look:

There are health orbs now. More on that below in the part about balancing.

When you die you loose the current xp that you collected since the last level up. Before, that was an ugly sprite which is now also replaced by the nice little orbs. So sometimes you'll see an xp explosion like this:

I also optimized the variance in the positioning and the tweens when they drop, as well as their speed and collisions are completely disabled for them. They even go through walls to reach you.

It's not so easy to get this right if you are the developer. But I try to respond to feedback as good as I can. Nobody really reached the last dungeon, so I tried to make it a bit more easy but not too much.

You have now initially 5 hit points instead of 3 and enemies have a small chance of dropping a health orb. The "shrine" in the safe room also drops health orbs, so that you have full health again when using it, even after activating the room for the first time. That was already the case before but now it's a bit more obvious so players hopefully make use of it more.

Therefore spiders make 2 damage now and the daemon 3. Spiders are also added earlier now, in dungeon 7 instead of 9.
And the "time eater" starts to follow you now when you get closer than 150 pixels. Before that was set to 100. It is also a bit faster.

In the dungeon 12 (the last one with content) and after, I put credits: 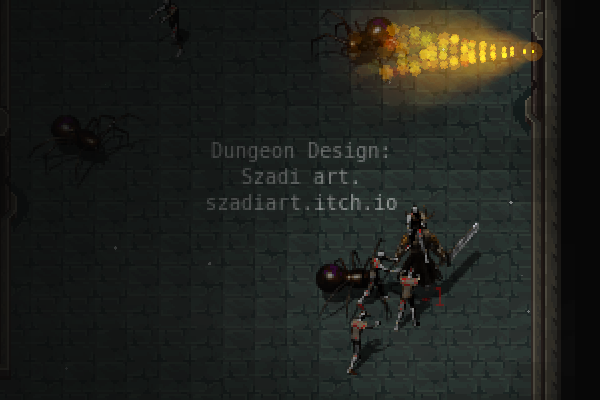 I found that to be a nice way to do it and it saves me from making an actual end/credits screen. :P

And just for the sake of completeness, here are some more fixes and improvements:

This is the first time ever I am creating a game. It's a lot of fun but it would be even more fun if you'd show me some support. I have a patreon page but no patrons yet. :D

Or donate by clicking on the "Support This Game" button below the game.

A good rating and some comments are also very helpful to get more exposure.