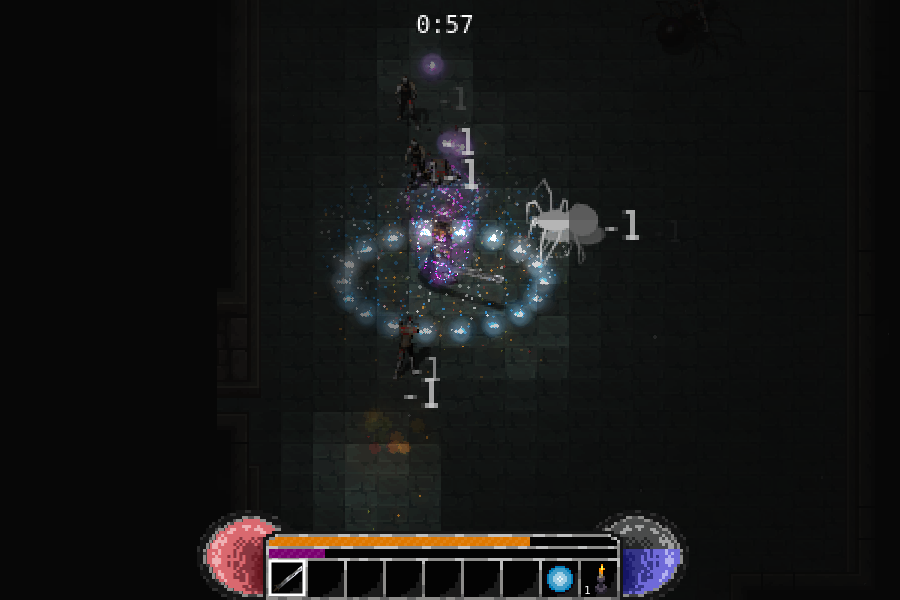 I made some progress again. You have mana now to cast a shield, some animations were improved and I made a first attempt to implement mouse controls to move and attack.

You have 3 mana now right from the start. You just need something to use it for.
At some point you'll find a shield spell. Later in the game the number of enemies can become quite challenging, especially if you die a few times. The shield pushes enemies away from you, so you can get through.

In a later update you will be able to use skill points to increase it's duration and let it damage enemies.
But first I want to add a fireball spell! :D

I really start to love these particle emitters in Phaser 3.

Just a second layer of smaller particles... of course. :D

There's also a new speed boost, when you died, to make it less annoying to walk aaaall the way back to where you died.

To add a bit more cinematic feeling I added these letterboxes (That's what they are called?) when the narrator freezes you because he needs to say something important. :P

Most importantly though, I fixed an issue that made it possible to screw up the story/narrator when going to fast/skipping rooms and so on. Now the order of events is a bit more hard coded. You HAVE to find the sword first, and then you MUST kill 3 enemies before you can find a torch... and so on.

I also wanted to implement subtitles for the narrator but I ended up using them as help texts for now. The story is... well, not really existing at the moment. So sound files and related subtitles will change anyway.

This is what people asked for, even though I like the keyboard controls and to be honest... my implementation of the mouse controls is not really good at the moment. But it's a first iteration.

The click animation is of course another particle emitter. :P

While finding the path through the doors works good... auto-attacking does not.

The zombie is simply too fast! xD
I'm pretty sure it won't stay like this but for now I just recommend using the keyboard. ;)

That's it. Well, there have been lots of smaller fixes and improvements but nothing to show off here.

On and before I forget again... The repository is on GitHub: https://github.com/mktcode/deepest-dungeon